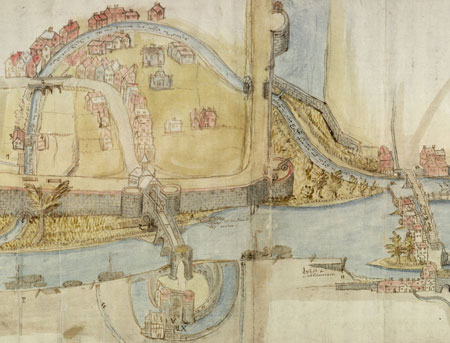 Maps spark our imagination. Since the early modern period, maps were produced in large quantities by church institutions, aristocratic families and other archive creators who charted their real estates in individual property maps or map books. Maps were also drawn in the context ? of public works, taxation, military operations or lawsuits.

The State Archives keeps vast collections of cartographic material. In the past years, over 150,000 maps were digitised, of which some 137,000 can be accessed online using the search engine Search archives. Furthermore, the portal site Cartesius enables geographical search in over 200,000 maps and aerial photographs, 44,000 of which are kept by the State Archives.

A number of maps are kept in their initial context, that is to say within the archive file in which they were created. Other cartographic material was extracted from its original file (archives of ecclesiastical institutions, courts, etc.) in the 19th century and brought together in - artificially created - collections (per archive repository). As a result, the link to the initial archive creator was lost in many cases, which can complicate the interpretation of the archives.

Almost every State Archives repository has compiled a maps and plans collection in this way  (those for the provinces of Flemish Brabant, Walloon Brabant and Brussels-Capital Region are kept at the National Archives).

In the early 19th century, land registry services have started mapping territories in order to be able to levy taxes from real estate owners. For almost the entire country, the so-called “primitive (first) cadastre”, created between 1808 and 1834 (1844 for Limburg and Luxemburg) and the municipal boundaries from the same period can be consulted in digital format. In total over 25,000 maps provide a detailed view of even the smallest plots. They form a snapshot of 19th century landscapes, cities, villages and neighbourhoods, just before the industrialisation, urbanisation and large-scale infrastructure works of the 19th and 20th century.

The approximately 60,000 Scans of the “minutes of border demarcation” provide insight into the process of establishing the boundaries of municipalities and parcels.

In collaboration with FPS Finance.

You can search cartographic material for a specific region using cartesius.be. The portal provides maps from the collections of the State Archives as well as Popp and Ferraris maps (Royal Library of Belgium), aerial views and topographical maps (National Geographic Institute), and maps of Central Africa (AfricaMuseum).

Cartesius allows geographical searches. On a contemporary map you indicate the area for which you would like to find historical maps, upon which the search engine displays those documents that pertain to the area. To make this possible, the cartographic material not only had to be digitised and described but also enriched with correct geographical metadata (georeferencing).