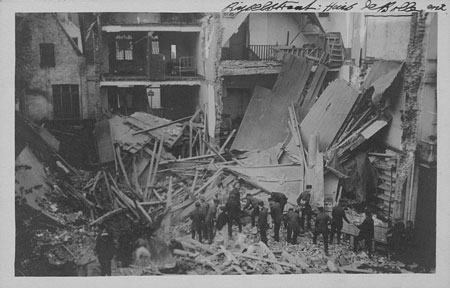 Many key archival holdings form the Second World War, such as court files about collaboration, contain privacy-sensitive information and are therefore not accessible online. On the other hand, the voluminous collections of pamphlets, posters, war journals and photographs mostly kept at CegeSoma are available online. The filing cards providing access to the particularly rich series of war damages files can also be consulted online.

Considerable damage was inflicted to private property during the Second World War. Indeed, between 1940 and 1945 a total of 506,090 real estates – accounting for 23,3% of all buildings that existed before the war – were damaged or destroyed. This concerned 16,803 industrial and commercial properties, 31,253 farms and countless private residences. No province was spared.

For the purpose of compensation claims, the owners drafted detailed lists and descriptions of the damages to their properties and added photographs, proof of purchase, certificates, maps, postcards, etc. Although they are in black and white only and often completely yellowed, these visual testimonies give a poignant picture of the scale of “collateral damage” that occurred during the war. The State Archives conserves about 800,000 of such individual war damages files. Not only do they form a fascinating source for family history, they also offer a multitude of research opportunities for the study of various aspects of the social, economic and cultural history during and after the Second World War.

The photo archives of the press agency Sipho (Service International Photographique), preserved as pieces of persuasion by the military prosecutor’s office for the post-war collaboration trials, hold some 250,000 items. A certain number of photographs are not accessible online due to privacy restrictions. After its recognition by the German Propaganda Abteilung, Sipho became the main press agency in Brussels. From 1940 to 1944 it made photographs about current events or on order of the Propaganda Abteilung. In 1946, the director and most photographers who had worked for Sipho were convicted for collaboration by the war tribunal in Brussels. The equipment and archives of the agency were seized. The photographs not only relate to the Second World War but also to everyday life in the 1930s and 1940s.