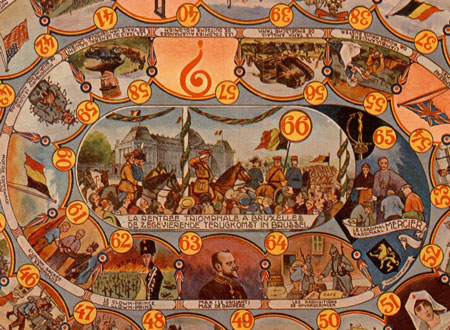 Various archive creators have provided us with rich archival holdings about the First World War. Within the framework of the commemorations of 2014-2018, many of these series were digitised: Photographs and posters, but also extensive series of first-order sources such as the archives of the Council of Flanders and the war reports of the parishes. It concerns both archives that were created during the war, as well as collections assembled after the war. In this regard, the Commission for War Archives created in 1919 played a key role.

The documents bear on the most diverse aspects of the conflict: invasion, massacre of civilians, campaigns to protect cultural heritage, military operations at the Yser front, everyday life, reception of Belgian refugees abroad, destruction of industrial facilities, the liberation of the country, victory celebrations, etc.

Photographs, drawings, posters and other objects

The rich iconographic collection about the First World War kept at the National Archives is the result of a large-scale collection campaign in the wake of the war. Thousands of photographs and drawings illustrate various aspects of the ‘Great War’: invasion, military operations at the Yser Front, everyday life of the soldiers, propaganda, reception of Belgian and foreign refugees, collaboration, resistance networks, liberation, etc. The collection of (colour) posters reflects the powerful imagery used by the warring parties for their propaganda (1017 items); and the text posters of the city of Hasselt also give deep insight into the impact of the war on everyday life of the citizens (1022 items). This also applies to the collection of medals and other objects (pins, ribbons, party games, etc.) collected by the Commission for War Archives.

The digitised collection of photographs, postcards and posters kept by CegeSoma is mostly composed of items from private collections (family albums).  The majority of these images depict military aspects of the war and the lives of the soldiers at the front. The collection also documents various aspects of social life in general during wartimes, such as care of the sick and captivity as a prisoner of war.

With the support of the Commissioner General’s Office for the Commemoration of the First World War and with thanks to the National Lottery.

Archives of the Red Cross

The archives of the Red Cross are essential for understanding the mode of operation of medical services in war times, at the front, but also in occupied Belgium and abroad. They contain thousands of file cards with information about wounded Belgian soldiers treated in Belgian hospitals. Over 70,000 of these filing cards, which are sorted by the place of residence of the soldiers, are available in digital format (catalogue numbers 176-242). The archives also contain hundreds of photographs that very well illustrate the mode of operation of the Red Cross, the commitment of doctors and nurses, and everyday life at the front (catalogue numbers 94-160). A photo collection from the American Red Cross shows among others the conditions of refugee centres in France and the Netherlands during the war (catalogue numbers 676-849).

In December 1918, cardinal Mercier instructed an inter-diocesan commission to document what happened during the war in the Belgian parishes. In spring 1919, all parish priests received a questionnaire that would serve as basis for the drafting of the reports. After a short overview of the parish, the reports had to contain detailed descriptions of the German invasion and all sorts of aspects of the occupation regime, with particular focus on the impact of the German occupation on religious life, forced labour, the deportation of workers to Germany and the fate of political prisoners.  The reports concluded with descriptions of the end of the war, the retreat of the German army and the return of war prisoners and political prisoners. Cloisters and episcopal schools also had to submit such reports.

These very detailed and rich reports were collected per diocese. The publication of a related memorial book (as initially intended) eventually never took place, but these documents are now accessible online for most Belgian parishes, arranged by diocese. They provide a fascinating but also painful image of the impact that the First World War had on the daily lives of ordinary citizens.

With the support of the Belgian dioceses.

Through its Flamenpolitik, the German occupant promoted the creation of a satellite state in Flanders. In order to make this undertaking acceptable in the international public opinion, this undertaking had to be officially ‘requested’ by the Flemish themselves. For this purpose, a semi-representative assembly, a kind of proto-parliament that could serve as requesting party, was established on 4 February 1917. The Council of Flanders distinguished itself as a prefiguration of a future ‘Flemish parliament’ and took the Belgian parliament as a reference with regard to organisation and working procedures. The last gathering of this assembly took place on 20 September 1918. Remarkable items from these archives include:

All in all, these archives offer an in-depth view of activism down to the local level. The numerous geographically arranged series allow for thorough local research.

Archives of the resistance and intelligence networks

After the war, the Commission for the Archives of the Patriotic Services established in Occupied Territories at the West Front (Commission des Archives des Services patriotiques établis en Territoire occupé au Front l'Ouest -Commissie voor de Archieven van de Vaderlandse Diensten gevestigd in Bezette Gebieden aan het Westelijk Front) collected the archives of the various resistance and intelligence networks that operated in Belgium during the war. The most fragile files of these archives (catalogue numbers 1-189, 572-694, 3279-3587) were digitised. These include personal files, reports about resistance actions, aerial views, glass negatives, etc. In addition, the many farewell letters of resistance fighters sentenced to death form a very emotional testimony.

Reports of the National Relief and Food Committee

The National Relief and Food Committee was created in 1914 in order to distribute the goods provided by the Commission for Relief in Belgium among the population.

In addition to the supply and distribution of food, the committee also provided aid to refugees, homeless, workless and war orphans. The general reports that the organisation published after the war (catalogue numbers 1-8) are available in digital format.

Letters of safe-conduct for refugees

For Belgian citizens who fled to the Netherlands, the archives of the Official Belgian Committee for the Netherlands (“Officieel Belgisch Comiteit voor Nederland”) contain the return permits issued in 1918 by the Belgian consulates, which hold among others useful information with regard to the latest address where a refugee resided in the Netherlands and the date of his or her return. Unlike other archives about refugees, these records often also contained photos of the person in question. This collection is a gold mine for genealogical research. Thanks to the help of volunteers, some 3,000 names were added to the data base of the search engine “Search persons”.

When the Belgian authorities ceased the lawsuits against German war criminals in 1925, the case files of default proceedings were collected by the military prosecutor’s office (Krijgsauditoraat/auditorat de guerre). In 1940, the Nazis sent these sensitive files to Berlin, where the Russians looted them in 1945 and transferred them to the Osoby archive in Moscow. In 2002, these records returned to Belgium. A total of 87 files were fully digitised within the framework of the JUSINBELLGIUM project and can be accessed on the website of the Legal Tools Project of the International Criminal Court in The Hague.