How to get there

From 3 November 2016 : Tuesday to Friday, from 9 am to 4.30 pm (without interruption).
Closed on Monday, Saturday, Sunday and public holidays. 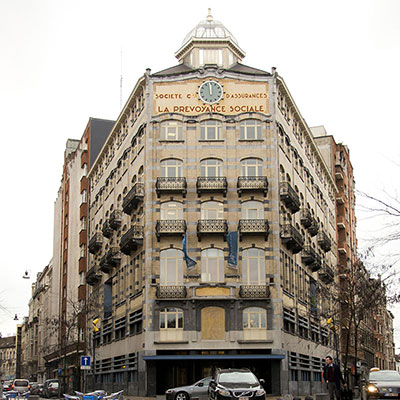 In the context of the launch of the genealogical website (in the autumn of 2022), certain digitised parish registers or registers of civil status will be temporarily unavailable. We thank you for your understanding and apologize in advance for this inconvenience! In addition, we would like to point out that six months after the launch of this new website, the current inventories in the search engine (ordered by province and municipality) will be taken offline. The digitised registers can then only be consulted via the genealogical website. Concretely, this means that the current URLs will disappear. If you have made a link to these registers (in a family tree or on a website), this will have to be adapted after the launch of the website.

The State Archives holds a real treasure of cartographic materials, but handing out original maps and plans in the reading rooms bears the risk of deteriorating the state of conservation of these documents. Indeed, repeated unrolling and rolling-up of these maps and plans that are sometimes of considerable size has taken its toll on the documents, which called for a large-scale digitization campaign. In recent years, some 60,000 maps and plans were digitised. This number increases steadily. Roughly 44,000 of these digital images have been processed and are now available for research.

The State Archives will be closed on Wednesday 15 November 2016.

The CEGESOMA was created in 1967 and is now part of the National Archives of Belgium. In January 2016, it was officially incorporated in the State Archives.

Initially called the Centre for Research and Studies on the History of the Second Word War, it was founded on 13 December 1967. Its task was “to take all necessary measures to collect, preserve and study documents or archives relating to the Second World War in Belgium, its antecedents, background and consequences” (Belgian Official Journal, 10 February 1968, no. 29, p. 1259-1261). Originally, the Centre was attached to the National Archives and was placed under the direction of the Department of National Education.

In 1969, a team of six researchers set to work and laid down the essential milestones which were to pave the way for a number of pioneering studies on the Second World War. In 1971, in collaboration with Jules Gérard-Libois, José Gotovitch published the reference work “L'An 40”. From the onset, the Centre was a member of the International Committee for the History of the Second World War.

In parallel to its research activities, the Centre concerned itself with building archival collections from the period 1939-1945 and the constitution of a rich library which gradually expands its collections domain. Furthermore, its photographic archives was from the start one of the richest in Europe with regard to the Second World War. The collections have expanded considerably over the last years. Finally, the digitisation of the collections which started in the 1990s with the photographs has accelerated from 2000 onwards.

From the 1980s, to create a link with the academic circles, the Centre organises monthly seminars and from 1990 onwards it holds international symposia. Increasingly, the Centre carries out its own research projects.

From 1993 to 2004, the centre housed at Residence Palace. In 1997, the Centre for Research and Studies on the History of the Second World War changed its name to Centre for Historical Research and Documentation on War and Contemporary Society (CegeSoma). Its field of activities has now extended to the history of the 20th century.

In 2000, the CegeSoma joins the Documentation pole that also comprises the State Archives and the Royal Library. According to the normative provisions in force, the National Archivist is a member of the Scientific Commission and of the Management Committee of CegeSoma.

On the 1st of January 2016, the centre changed its name to Study Centre War and Society and was incorporated to the State Archives in which it became Operational Directorate 4 (OD4).

The archive collection of CEGESOMA consists of 1,356 meters of paper records, 165 filing card boxes and 4,675 microfilms from the period 1914-2000. The collection includes personal archives, archives of private organisations, of collaborators and collaborationist movements, of resistance fighters and resistance organisations, of official institutions and services that existed only between 1939 and 1946 and of microfilms and photocopies of foreign archival collections. Some archive collections are already accessible online.

There are 17 archive sub-sections of equivalent archive creators.

The collection allows researchers to explore a variety of subjects, in the first place on the Second World War: the policies of the Occupation authorities, the Resistance, the collaboration, the policies of the Belgian authorities, the persecution of the Jews, the Belgian government in London. The post-war period also offers a wide range of research possibilities, mostly on war-related phenomena such as the Liberation, the post-war purges, post-war policies, the repatriation from Germany, the representations of the war in the media. On socio-political questions such as the extreme-right, human rights, the peace movement and third world policies ample material is available.

Three types of archival collections have a specific character.

Databases have been created on a specific theme, often with particular research scopes, such as the surveys carried out by the Centre on subjects such as “the Church” and “Forced Labour” and the archives compiled for the broadcasts by the RTBF and the BRT (respectively Francophone and Flemish television) about Belgium during the Second World War.

The microfilms of foreign archival collections bearing on Belgium have foreign but no Belgian archive creators. For example: German Records Microfilmed at Alexandria, which are documents about post‑1945 Belgium that were microfilmed in the United States.

The photographic archives: CegeSoma conserves over 300,000 photographs from the Sipho agency, shot by Otto Kropf (about daily life in occupied Belgium), Raphaël Algoet (liberation of the German concentration camps in 1945), André Cauvin (Congo among others), etc. They can be accessed and viewed through the online catalogue.

The poster collection: CegeSoma conserves some 3,000 posters. A large part of this collection is related to the Second World War. It contains placards originating from the Belgian administration and documents issued in the context of the German and Allied (British and Canadian) propaganda. But other themes are also prominent: Communist propaganda, the cinema, colonial propaganda, the 1930s, Rexism, pacifism, the Cold War and European integration. Part of the collection of the well-known artist Wilchar of the 1930s and 40s also forms part of our poster collection, which, at present, consists of some 3000 posters. They are gradually scanned and introduced in our Pallas image bank.

The videotape collection: The videotape collection of Cegesoma consists of approximately 600 tapes and includes primarily the documentaries made by the francophone (RTBF) and the Flemish (VRT) television on the Second World War (notably the programmes made by Maurice De Wilde on the pre-war and occupation periods, the series on the Resistance and on daily life, the series Jours de Guerre, etc.). In our commitment to accessibility, the collection has gradually broadened its themes. It includes in particular the complete RTBF-series Inédits. We also hold a large and continuing collection of DVD tapes.
Click here to consult the video collection.

The sound documents: The basis of the collection of sound documents consists of 4,500 records originating from Radio-Bruxelles and Zender Brussel, the two broadcasting stations that were on the air during the occupation period, together with Radio Belgium of London and New York. The Centre keeps an original of this collection and a copy on cassettes (the result of a collaboration project with the VRT). From this material two sound documents were produced in collaboration with the VRT and the Crédit Communal/Gemeentekrediet: België beeft en … buigt (on the pre-war period in Belgium) and België bezet en bevrijd (on the occupation period and the Liberation). Click here to consult the sound documents

The interviews: CegeSoma keeps an important and varied collection of interviews:
-    1,800 interviews (all of which are digitised) of former resistance fighters, collaborators and other eyewitnesses of the Second World War undertaken by researchers from the Centre.
-    700 interviews by journalists of RTBF (from the series Jours de Guerre)
-    The interviews by Maurice De Wilde (VRT) for his broadcasts on collaboration, repression and resistance.
-    1,200 interviews on daily life in Belgium during the Occupation, recorded between 1984 and 1998 in the course of a research project at UCL (Catholic University of Louvain-la-Neuve) led by Professor Jacques Lory. Click here to consult the interviews recorded by CegeSoma researchers.

The library comprises about 90,000 books and brochures, more than 4,000 periodicals and newspapers and a large collection of press cuttings. The focus lies on 20th themes with a relevance to contemporary conflict such as nationalism, ethnicity, racism, migration, communism, the extreme right, colonisation/decolonisation and genocides. The library of CEGESOMA is accessible through the integrated catalogue Pallas. 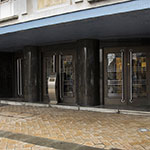 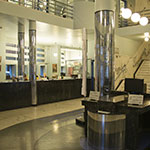 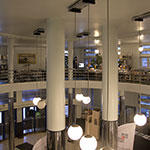 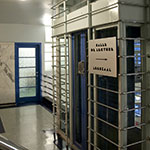 The CegeSoma is located in the city centre of Brussels, and at 5 min. walking distance from the international railway station Bruxelles-Midi/Brussel-Zuid.

By foot:
Take the exit Tour du Midi/Zuidertoren, follow the street on the left of the tower, cross the boulevard and the square Place Bara. Then take the first street on your right Rue de l'Autonomie/Zelfbestuurstraat. The CegeSoma is at the end of the street, on your left at Square de l'Aviation/Luchtvaartsquare at no. 29.

By car:
CegeSoma is located close to Boulevard du Midi/Zuidlaan (on Brussels inner ring road), but spaces are limited and parking is not without risk.

Access for persons with limited mobility:
The State Archives commits itself to ensure access to its reading rooms and public spaces to all visitors. Measures have been taken in the past years to improve access for persons with limited mobility (access ramps, adapted toilets, etc.). If you have specific questions about accessing the CegeSoma, please contact us by phone at + 32 (0) 87 55 43 77 or by e-mail.